Morocco and 5 facts about the Sahara desert 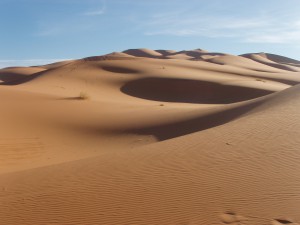 1. It’s not the largest desert in the world but it is the world largest hot desert and one of the harshest environments on the plant. It is the 3rd largest desert behind the Antarctica and the Arctic which are cold deserts. The Sahara covers over 3.6 million square miles with 11 countries having part of it within their borders. They are Morocco, Libya, Algeria, Egypt, Tunisia, Chad, Eritrea, Niger, Mauritania, Mali, and the Sudan. The Sahara is only slightly smaller than the USA!

2. It is not hot all the time. Most people think of the desert as a giant furnace but during the months of December to February the night time temperature can plunge to below freezing. During the summer season the temperature exceeds 50c, some of the hottest days on the planet. It features a mix of sandy and rocky terrain with sand dunes and scorching bare rocks, dotted with oases near water areas.

3. It does rain although not very often!  It receives less than 7 cm of rain per year. Rainfall can range from twice in 1 week to an extreme of no rain for 3 years

4. Dromedary Camels are not native to the desert but have been around for a long time. They are most often associated with the Sahara and were introduced approximately 200.A.D. Their advantages over horses include soft feet that are aligned so that they can move more quickly and easily through sand and their ability to go for up to 17days without water or food

5. Sahara is Arabic for ‘The Great Desert’ Some of the sand dunes of Erg Chebbi(Morocco) reach a height of up to 150 meters in places and altogether spans an area of 50 kilometres from north to south and up to 5 to 10 kilometres from east to west lining the Algerian  border.